pastiesforlife wrote: As the revelations, visits and sightings grow, of course he should be sacked. Only yesterday, his father denied he had been there.

Embarrassingly his chums will do all they can to protect him and keep him. An easy target for the new a Labour leader but will he go for it.

I'm sure Starmer will go for it - why shouldn't he?

I think that what it comes down to, really, is that Johnson would have no idea what to do without Cummings breathing in his ear, Grima Wormtongue-like, so in a desperate attempt to hang on to him he'll just brazen it out, as he's done his entire life, because he has no shame. Neither of them do. They feel impervious.

Remember, hope is a good thing, maybe the best of things, and no good thing ever dies!


True! I thought Boris rather resembled him while delivering his infamous "Stay Alert" pre-recorded shambles of a vaguely speech-like guidelines briefing thing two weeks ago, though.

Remember, hope is a good thing, maybe the best of things, and no good thing ever dies!


Is anyone really surprised about this? Did you really believe BJ gave a crap about ordinary folk and wasn’t an entitled buffoon? Oh, you did? Well, welcome to what he really thinks of you all.


Not in the slightest, and no I didn't.

The trouble with people like him is that they always know they'll be able to fool enough of the people enough of the time.
PIES - Pilgrims In East Sussex

Some scientists are now making their opinions known.

Boris facing a real crisis just a few months into his leadership. Strange how his recent communications have been so uninspiring and inept because , to be fair to him, he can usually play a crowd quite well with his chummy banter. The Sunday "clarification" on lockdown easement and now dodging virtually every question re DC today have both been not far short of pathetic and reflective of the recent shambolic Government performance.

We knew he hates scrutiny but what did he expect as PM?

It's unbelievable that the Government think Cummings is more important than the lockdown message for the whole nation.
Future guidelines will be ignored by the public and the sad thing is that the latest death figures today was overshadowed by what Cummings did.

The Government do not gain anything by protecting one bloke and instead have lost the country.

There's too much at stake - lives, jobs, the economy - to save one persons job.


Frank Butcher is very quiet. Usually the first to come on here and defend HM Government(or should I say the Tories?

Bad news for Boris, the Mail has turned on him.


Balham_Green wrote: Frank Butcher is very quiet. Usually the first to come on here and defend HM Government(or should I say the Tories?

What are you on about now? Instead of wetting yourself thinking you have one upon me (which is pretty sad anyway), can I suggest you read post number 3 on the previous page?

Unequivocally he should have been sacked and Boris has made a huge error of judgement.

That OK with you?

Surely this is proof to all that voted for Johnson that he is lost without the unelected Rasputin of the Conservative party and alas currently our government.

Cummings is the driving force towards the downfall of this country. His disrespect for the British establishment, has been there for all to see for decades, yet this pathetic party have allowed him to manoeuvre himself into a position of power, as they really have no ideas of their own, other than of their own self importance and egos.

His belief in eugenics and chaos theory ( ie survival of the fittest) are extremely dangerous policies for a country to follow, yet we blindly put our trust in this man to guide us over a cliff edge.

He believes that if an institution or organisation is not running to perfection, or to the way they would like it, rather than adjusting it to do so, it should be dismantled altogether and by appointing super intelligent and radical individuals to then head it up. The ensuing chaos will force them to create something better. (e.g he has attempted to apply this philosophy to different degrees, to the Education Dept, Civil Service, BBC, NHS, EU, etc).

The problem is he has contempt for and is unacountable to the general population, and will not face public scrutiny.

Apologies for going into Kevin Keegan mode but 'I would really love it' if this was the demise of Cummings. Sadly I feel he has too strong a grip on this party for them to get rid.
Formally reigate_green.


cheshiregreen wrote: Bad news for Boris, the Mail has turned on him.

That’s quite amazing. I don’t think I’ve ever seen such unity in condemnation. What’s worse than the event itself is the arrogance of their (Boris and Cummings) ‘them and us’ attitudes. I think they could have ridden the storm regarding the travel to Co. Durham with some humility - an acknowledgement that rules were broken and a detailed explanation of why the decision was made. But hubris got in the way and has undermined any confidence people had - and to fair it was dwindling anyway.

A disaster for the Covid-19 response plan and a massive miscalculation for the Government. Pressure will surely build for a change (again).

Tom Newton-Dunn who is very well connected reports on Twitter that only 2 MPs are supporting Cummings on the Tory WhatsApp group - Andrew Mitchell and our very own Sheryl Murray. 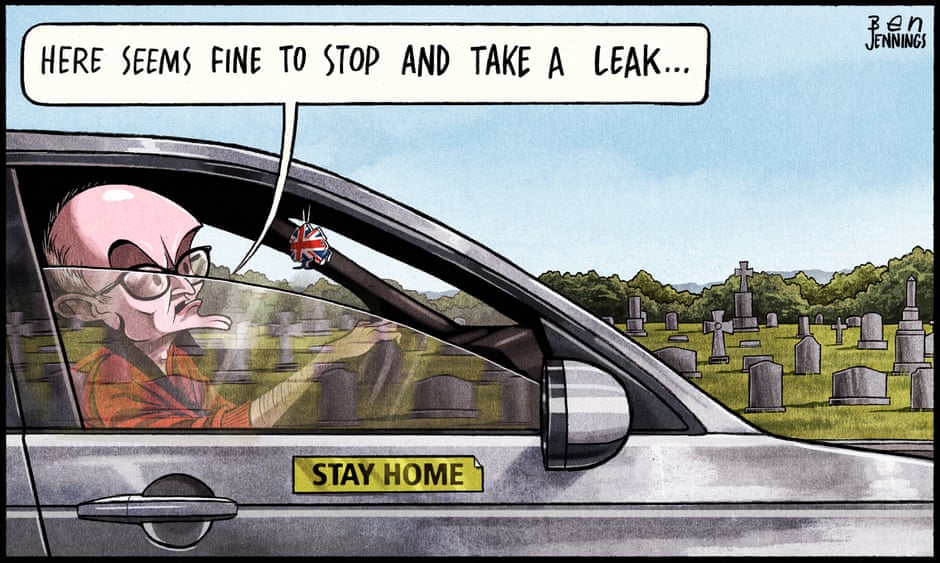 Users browsing this forum: No registered users and 49 guests