#letfansin
General The Football Forum
A board for general discussion about football (non Argyle).
Sponsored by 5 Star Property Services
112 posts Page 2 of 9
Post a reply
Previous 1, 2, 3, 4, 5 ... 9 Next


Gutted but wish him well. I'm not sure he's as easy to replace as some think. Very powerful and energetic with an eye for a goal and an assist. A bit hole to fill i would say.

Good look Sarce and thanks for your efforts in getting us back to where we belong
1.Nicholls 2.Patterson 3.Williams 4.Friio 5.Coughlan 6.Wotton 7.Norris 8.Castle. 9.Evans 10.Carey 11.Dalton

I'm disappointed as he's a great character and had a great season. This time last year I may not have been too bothered but he's improved a lot under Lowe and in this system. We lose our Player of the Season once again. I'm confident in Lowe's ability to get the right player in.

Thank you, I try my best.

Re: Lowe confident Sarcevic will stay at Argyle


GTTB Resurgam wrote: I respect his right to make this decision and wish him all the best. Obviously family has played a big part in this but my gut feeling is he will regret this when looking back at his career in 10 years.

I don't think he will GTTB. I honestly think he's realised League Two is his level. He's had three unhappy experiences in League One compared to three promotions in League Two, which would have played a big factor in his decision (even if he wouldn't admit it to anyone but himself).


The Herald headline was a little misleading and it's clear Lowe at least had a feeling Sarce was moving on, and was being diplomatic.


Cobi Budge wrote: Could have jumped ship following relegation but he stayed and played a huge part in getting us up.

He was under contract so could only have left if Argyle sold him or cancelled his contract.

He releases a statement ... 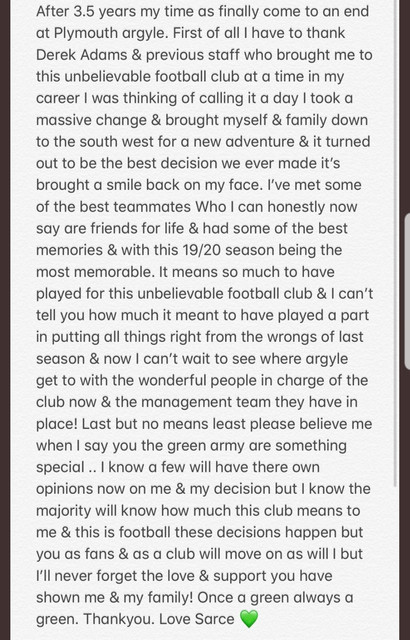 
Cobi Budge wrote: Could have jumped ship following relegation but he stayed and played a huge part in getting us up.

Except that he was under contract.

He's had a great season and I wish him well. What I find a little odd is the slightly Holloway-esque statements in the last few months. I've no doubt that he has enjoyed Plymouth, but it's a bit strange to go so public with this positivity, in the knowledge that he's going elsewhere.

Cobi Budge wrote: Could have jumped ship following relegation but he stayed and played a huge part in getting us up.

He was under contract so could only have left if Argyle sold him or cancelled his contract.

Exactly. No-one was going to be banging our door down to pay a fee for a player who'd done little to prevent a relegation.

OK. Time to move forward. Hour or so of that news sinking in then something positive (in experience of watching how the Argyle media cabal works).

Very nice statement btw
"I think it is important to win a match, but I think what is even more important is the manner in which you win." - Jock Stein.


Deacster wrote: Gutted but wish him well. I'm not sure he's as easy to replace as some think. Very powerful and energetic with an eye for a goal and an assist. A bit hole to fill i would say.

Agreed. He will be missed. We could find ourselves exposed in the middle of the park without adequate replacement.

This frees up the attacking right-midfield position for another player. I always assumed that Cooper was brought to the club to play that role - Mayor on the left cutting in on his stronger right foot with a left-footed wing back outside him and Cooper on the right cutting on on his stronger left foot with a right-footed wing back outside him. Then he didn't play that role because Sarcevic became surprisingly effective and important there. Carey would fit pretty well there too (best place for him in a team in my opinion). But 'obviously' neither Cooper or Carey will be coming back to Home Park so it'll have to be some other player of that ilk...
We move on. Thanks Sarce - you were excellent last season and not bad the one before.

Re: Lowe confident Sarcevic will stay at Argyle


demportdave wrote: He did have a pretty good season and scored some important goals.

He looked fitter and seemed to enjoy his football a bit more playing for Lowe compared to Adams.

I would have been quite happy for him to have stayed but won't lose any sleep over him leaving as he was pretty average in our relegation season, so maybe staying in League 2 suits him from a footballing perspective.

I don't blame him for wanting to relocate back home and I'm sure that Salford can more than match any offer from Argyle or most other clubs at our level, so good luck to him.

Whilst I genuinely wish him well on a personal level, I find it hard to say anything positive about such an artificial club as Salford. They represent everything that is wrong with the financial model of lower-league football.

He's a league 2 player. Not consistent enough for league 1. I'm guessing Lowe made him an offer that reflected the fact that he wouldn't be getting much game time. Turning it down for 'family reasons' is just the stock response for saying the money wasn't good enough. Its not attractive to say its about the money as no-one likes to be seen as a money grabber. If Lowe's offer was a decent one then he would have stayed, after all, he loves it down here.
Just another example of people p*ssing down your back and telling you it's raining.
One day there might just actually be a bit of honesty from players, managers etc in what they say. Not sure I'll see it in my time.
I did like that he played his football with a real honesty though. Good luck to him wherever he ends up.

Re: Sarcevic moving on - confirmed (merged)

Once the furlough scheme ends there's no guarantee that we can pay wages without fans returning to the stadium, so if it's true that Sarcevic is signing for Salford they have the financial backing to pay wages without crowds at games (which is more or less what they do anyway).

Users browsing this forum: No registered users and 176 guests