Going back to Frank's O/P, I don't think the local elections, nor for that matter the upcoming European elections, will tell us anything. My concern is that the Lib Dems have always been the protest vote in mid-term local elections so you can't really read much from the results from last week and translate it to the national stage or Brexit (I have a mate who happened to be ... or at least was ... a Tory counsillor up in Weston Super Mare - he lost by 16 seats. He said that the main feedback he got from his doorstepping was, as he said it, "a plague upon both your houses").

The same can be said about the upcoming EU election: I fully expect the Brexit party will do well, only because they'll be the flag the anti-EU members of the population will congregate to. And this I think is a real probem for the Remain campaign: they don't have a flag to rally around. Farage is as slippery as an eel and he knows what he's doing, while the Remain voters are fragmented.

For me, the upcoming Peterborough by-election will be a better indicator when it comes to Europe: at the last election Labour and the Tories stormed away with the votes (22,950 and 22,363 respectively, with a +12.5 swing to Labour) while the Lib Dems and the Greens were comprehensively beaten (1,597 and 848 respectively, although their negative swings were both less than 1%). Now I'm not saying that the pro-remain parties will ever overturn that result, but if there was a significant swing towards the Lib Dems and they cut the margin between themselves and the two main parties, then that's the point we can stick our heads up and maybe think there's a change afoot.
www.twitter.com/quinny265


r4h4al wrote: Greens are the only ones I admire, at least they've gained seats.

Though probably will vote Brexit Party so we can just honor the referendum and leave.

Surely your green admiration and voting intentions are mutually exclusive.

The Green Party support the close working togetherness of the EU and its influence throughout the world to tackle climate change.

Nigel Farage is a climate change sceptic so his Brexit party is hardly likely to have any environmental policies whatsoever.
Formally reigate_green.

pilgrimage wrote: Interesting comments by Tory minister stating that they all they were hearing on the doorstep was that people wanted to accept the referendum and leave Europe. Now by far the biggest gains have been made by pro Europe Lib Dems.

Lib Dems picked up all the remain votes, leavers didn't really have an out and out party to support as a whole. Ukip have lost troves of voters, I can't vote for them because they seem more interested in race issues and hiring Tommy Robinson. The euros could be different as we can all throw our votes behind Nige again

But I don’t get you, voting for Farage, is the same as voting for race issues, and having people like Robinson in the party.

It is now called the Brexit party.

You could say that at least the new UKIP are ‘honest’ about it – they are upfront bigots and racists. However, Farage and his Brexit party try to give themselves a respectable veneer with their smiley, flag-waving, jingoism but it is all part of the same spectrum of repugnant, prejudiced bullsh*t.

He said he’d be “concerned” about living next door to a family just because they were Romanians. When asked if he would mind if the family were German rather than Romanian he replied “You know the difference!”
When he turned up late for a TV interview he blamed immigrants for the traffic problems.
As UKIP leader he wanted to ban anybody with HIV from entering the country.
He defended a UKIP candidate for using the term ‘Chinky’ for a Chinese person saying “when you and your mates are going out for a Chinese meal what do you say your going for?”
In 2014 he declared that parts of the UK was “like a foreign land” and “unrecognisable because of all the immigrants”.
He said he felt uncomfortable on a train because “all of the foreign languages being spoken around me”
At a Q&A in the European Union he said there was no discrimination against women causing a gender pay gap – it was just that women are paid less simply because “they were worth far less” than their male counterparts.
As UKIP leader he called children born to migrants in the UK as “hidden migrants” and wanted them “re-classified” as such.
As UKIP leader he wanted employers to be given the right to deny employment to people based solely on their nationality …… (back to the days of ’No Dogs. No Irish’ then Nige?)

Now spot the white face on his infamous poster then Google similar Nazi propaganda posters from the 1930s…. 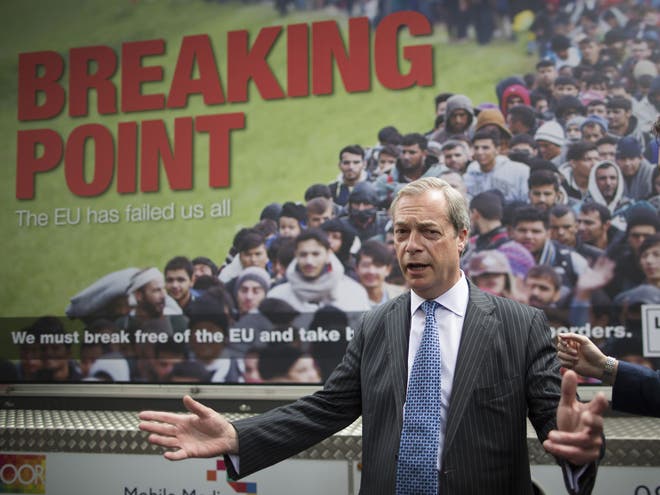 Quite where you draw the lines between the prejudicial slurs that Farage positively revels in and the more ‘honest’ racism of Tommy Robinson and the new UKIP party I admit I can’t quite define but the former certainly paves the way for the latter.

When Russell Brand called Farage “a Pound shop Enoch Powell” he was wrong …………...He is far more odious and has had a far more damaging impact on this country.
Smarter people than I have been total idiots - and I've met them all.


Farage is a very dangerous individual, just like Hitler, but in a slightly more subtle way, he is a very good orator. He comes across as your average, reasonable white guy just having a heart to heart chat and a laugh in the pub but his message is a hypnotic persuasion towards racial hatred and division.
Along with his Nazi admiring associates and friends, the likes of Bannon and Trump, he is creating hatred and division in the world just when we need to be pulling together to solve the urgent and major issues that affect us all.
Formally reigate_green.

Mike E wrote: Farage is a very dangerous individual, just like Hitler, but in a slightly more subtle way, he is a very good orator. He comes across as your average, reasonable white guy just having a heart to heart chat and a laugh in the pub but his message is a hypnotic persuasion towards racial hatred and division.
Along with his Nazi admiring associates and friends, the likes of Bannon and Trump, he is creating hatred and division in the world just when we need to be pulling together to solve the urgent and major issues that affect us all.

Who is paying for that then?

And why/how target me?


Well, the old children's programme Pogles' Wood was, of course, notorious for its subliminal neo-fascist messages.

I think you'll find that it was infiltrated. There was a plant but nobody could identify which character it was!!