This has been mooted for the last few weeks but it now does look possible.
Apart from the appeal of returning to the North West Salford also have the financial resources to guarantee paying a wage with the prospect of having no income from crowds at games. 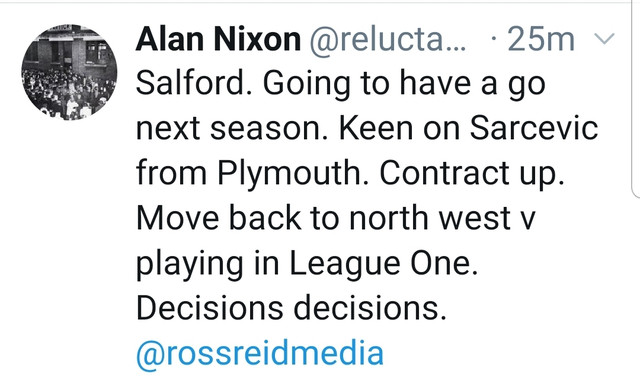 Salford may have the money, but you can not spend it if there is a (proposed) wage cap, plus Sarcevic appears to love the Plymouth area
Where Napoleons armies marched with horse and musket and Hitlers Reich crumbled in blood and rubble, the warriors of Armageddon do battle against the landscape of hell now indeed thrive the ARMOURERS


As I pointed out on another thread, Sarcevic played for Salford manager Graham Alexander at Fleetwood and scored the winner at Wembley when they were promoted in 2014. It's no surprise at all that he's a target for them, given that:

a. They can sign him on a free
b. He's from just down the road, so fits the brief of Gary Neville's north-west 'DNA' ethos
c. He's just won promotion from the division they're trying to get out of
d. He's very likely to be voted player of the year in a promotion-winning side

For Sarce, he gets to move back 'home' and almost certainly win another promotion. Salford will recruit heavily in anticipation of the rumoured salary cap, which presumably clubs will have at least a season to fall in line with.

I think we're nailed-on to lose our Player of the Year for the third season out of the last four, though I don't think we'll miss this one as much as we did the last two.

Looks plausible. I like him for his attitude (last season anyway) and he really seemed to improve his skills and fitness under Ryan Lowe. However, I can understand why he might leave so good luck to him if he goes. I have every faith that we will have a good squad this season whatever happens, whoever leaves, stays or arrives.


This was going around a few weeks ago, apparently he wants to move back up north and with being a Manchester lad then it’s no surprise


If he goes it'll just be a pity he didn't get to receive the player of the season trophy in front of the supporters.
Much respect for the way he pulled his sleeves up and played with clear determination to right a wrong when others couldn't wait to leave


Knibbsworth wrote: He is as good as gone.

I remember the same prediction about Graham Carey, and we know what happened with that one, he re-signed for Argyle.

Not that worried if he goes. Good L2 player but hasn’t got the legs, stamina or vision we are going to need at the next level. Been a good servant to the club though, so why shouldn’t he go back to his roots.
“What they need's a damn good whacking”


Devongreenowl wrote: Not that worried if he goes. Good L2 player but hasn’t got the legs, stamina or vision we are going to need at the next level. Been a good servant to the club though, so why shouldn’t he go back to his roots.

Hasn't got the legs or stamina??? Which Sarcevic have you been watching? He's arguably the fittest bloke in the squad!!!

Sorry Nobby, not from where I sit. No pace and starts blowing quite quickly. Obviously if there are stats that disprove my view I would be happy to see them. It’s all about opinions. I dont rate George Cooper as highly as some either.
“What they need's a damn good whacking”

you say Salford have the money but i am sure i heard that horrible man gary neville say they were skint the other day.


There’s a similar rumour about Doyle to Salford. His family is there, he’s been upfront about getting one last big pay day before he retires. Good luck to him if he does go.
Post a reply
Previous 1, 2, 3, 4, 5, 6 Next
75 posts Page 1 of 6
Return to Plymouth Argyle Fans Forum