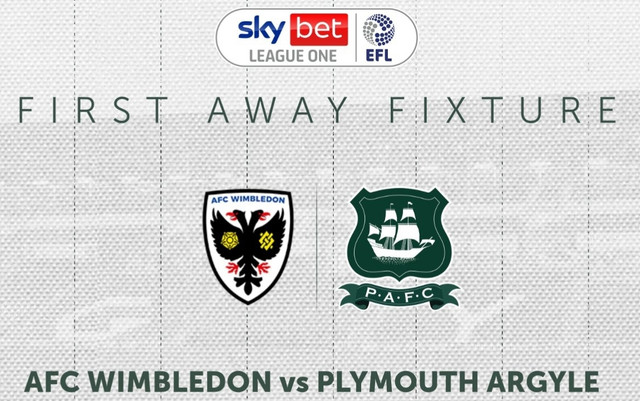 The countdown to AFC Wimbledon

The game will be played at Queens Park Rangers Kiyan Prince Foundation Stadium (Loftus Road) due to Wimbledon's new Plough Lane stadium not set for completion until the end of October.
The new 9,300 capacity stadium is sited just 200 yards away from the original Plough Lane ground where Wimbledon played until 1991. The project was financed by the football club, a building developer, a debenture scheme and the local council and will also provide residential units, shops and community facilities.

Wimbledon have had a mixed start to the season in the three games played so far; an opening day win on Tuesday 1 September against Charlton Athletic in the EFL Trophy was followed by a penalty shoot-out defeat to Oxford United in a Carabao Cup tie and then an away 2-2 draw at Northampton Town last Saturday in League One.

Experienced referee Trevor Kettle is the man in the middle for the game. Now in his 19th season as a front line ref Kettle was last in charge of an Argyle game in January last season when Mansfield Town lost 3-1 at Home Park.
He will be assisted by Stephen Finch and Nicholas Cooper while the fourth official is Ryan Whitaker.

An iFollow match subscription for £10 is available now. Away games are not part of the season ticket package. Buy here

AFC Wimbledon fan from website SW19 Army has kindly agreed to give Pasoti users an insight into his club with a Q&A ...
Q: How has your club coped through the Covid-19 pandemic?
A: It's not been easy for anyone, but we seem to have got quite lucky - furloughing helped, and we were fortunate enough that the higher-earning players were out of contract in the summer.
The new stadium could have done us in, but last week our Chief Executive (Joe Palmer) last said that debenture sales for the new stadium were going well (well on the way to reach the reported £1m target). Furthermore, we had two fundraisers last season pre-CV19 that raised over £7m, we were able to bring in an external investor and took out a loan that we can service at the moment.
We run on a shoestring as it is, probably too much so for the level we're at, but even though we had to make some redundancies it's ironic it might have helped us - we haven't had to drastically slash what we do anyway, so we've still be able to function.
Additionally, we've reportedly budgeted for a whole season without crowds, though hopefully we won't need to test that.

Q: What are your thoughts on manager Glyn Hodges?
A: Steadied the ship very well after Wally Downes left last season, and deserves the chance to get the clean slate and rebuild the side in his image.
We became more attack-minded when he took over, and the initial signs this season suggests that's continuing. He's not abrasive, nor does he seem to be stat-obsessed, which too many coaches try to be these days.
Obviously, being ex-Wimbledon FC helps his popularity no end, but he's got a decent pedigree too, especially working under Mark Hughes for Wales and Blackburn amongst others. I don't think anyone would object one bit seeing him lead us out in the first home game back at Plough Lane.

Q: Have Wimbledon been busy in the transfer market ahead of the new season?
A: Pretty much so - as said earlier we've managed to offload the more senior players, and a number of the squad players who get run-outs in the EFL Cup games.
We've managed to replace them with players who maybe aren't quite as experienced but are already showing a bit of confidence.
To give two examples of the type of player we're getting in - we signed Ethan Chislett from Aldershot, who scored on his debut at Northampton last week, after playing for the Met Police just over a year ago. We've got Ryan Longman on loan from Brighton who is starting to impress too. Mind you, we have also got experience in forward Ollie Palmer from Crawley, although sods law has ruled him out with injury so you probably won't see him this Saturday.

Q: Can you give an update on when your new stadium will be ready for use and its capacity?
A: Supposedly ready to open at the end of next month, although the pictures on Instagram HERE suggest we'd be going some to reach that. I went past it this week, and there's still a lot of things like putting in the floodlights, putting the perimeter wall and the turnstiles up, and putting asphalt down. So I'd say more likely end of November, although it's only been a thirty year wait so another month won't hurt.
Capacity will be just above 9,000 which doesn't sound a lot but would be more than adequate for a little while.
If and when Argyle fans get to a game there, the away capacity will be around 1500 or so, which is roughly what away fans initially get at Home Park. I believe that capacity can be increased though.
Oh, and you will be able to see the game, which wasn't usually the case at Kingsmeadow. It still amazes me how we got away with providing such an awful view.

Q: What are your expectations and predicted finishing position in League One this season?
A: Anything comfortable mid-table will do me. Since we got into League One it's basically been a constant struggle, and looking at the wrong end of the table most weeks gets quite draining.
Very early days yet, but after the Northampton game last week, and Oxford in the Carabao Cup, we do look more balanced and stronger, and perhaps even starting to look like we belong in the division now. Famous last words.

Q: Without giving too much away what style of football and formation are Wimbledon likely to use against Argyle?
A: As we're at "home" (OK, Loftus Road) I expect we'll be more attack minded. I think there's a sub-conscious realisation that we need to be a bit more positive this season, so I'm pinning my hopes on that.

Q: Looking from afar what are your views on Plymouth Argyle?
A: This season has to be a good chance to get the horror show that was Argyle's last League One campaign out of the collective systems. Promotion the following year is always a good way to do that, and it's always nice to win the first game back after going up.
Plymouth are a club who always appear to have a lot of potential but never seem to quite fulfill it. The support is certainly there, I've long been impressed with Argyle's away attendances in London, and I know of two Pilgrims who live within two miles of Wimbledon (including one who lived down my road).
I'm happy Argyle got promoted, although I know at some point you will get revenge for us winning at Wembley and then staying up at your expense two seasons ago. 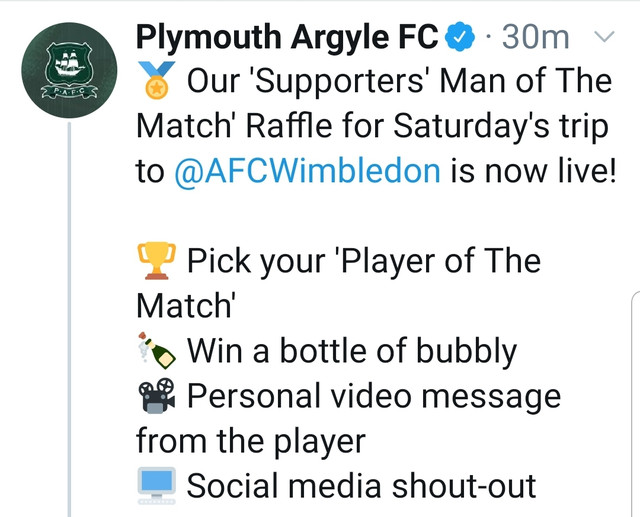 Joe Edwards looks ahead to the game .... club You Tube

"Plymouth did brilliantly last year to go up and they beat Blackpool last weekend so they've already got three points on the board. They didn't get the right result in midweek against against Orient. It's just about making sure we are ready and we know what we can do. We've worked on some stuff about them today and we want to take that into the game, give 100 per cent, and see where that takes us."

A reminder of the match programme details .... club website

Handy tips if you are using iFollow to watch the game ... 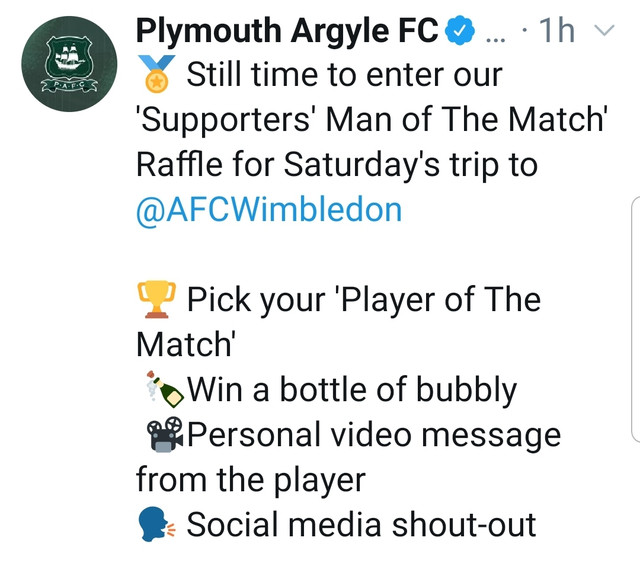 Argyle striker Luke Jephcott is a doubt for the game as he bids to overcome a thigh injury.

Thank goodness that he can only book or send off a maximum of six players!!

He never did quite come to the boil.

He never did quite come to the boil.

Don't know about that - always seems quick to whistle...
Chris

To be fair, didn't Brett Huxtable change our opinion of him a season or so ago? You know there is hope.

Oh no, he never gets a handle on things.

Oh no, he never gets a handle on things.


It’s early days so predictions are tentative, but I’m still expecting Wimbledon to be towards the lower end of the table this year if not fighting for survival, this is supported by the fact that they drew with Northampton last weekend who I expect to also be of a similar standard looking at their recruitment (or lack of), over the summer so far.


For tomorrow, I agree with those suggesting that we drop a CM back alongside MacLeod and into a 3-4-1-2 to be more conservative. We don't want MacLeod to get overloaded by an opposition press, it would enable us to play out from the back more effectively, and it would provide more support to our wing backs and outside centre backs. Mayor can then play a bit higher and hopefully be even more of a creative influence.

I completely disagree that we should go to a back 4. Lowe has moulded a squad around players that suit a back 3. Left back would have to be Law with Sawyer out injured, and there's no good fit at all at right back - we'd probably end up having to shove a centre half out there who would pose no attacking threat.

If Wimbledon play a back 3 as they did last week, I'd want us to play two strikers who are really good at working the channels off the ball and dragging their outside centre backs out to isolate the middle CB and create space. Early days of course but I haven't seen that much from Nouble in that regard so far, and Moore's movement was always impressive playing up front - it was his finishing that let him down. Also, Wimbledon have got some big centre halves who are good in the air, so I don't see Nouble getting much change out of them. We should look to stretch them with our play, not get drawn into an aerial battle with them.


Welwyn Pilgrim wrote: I’m expecting Hardie and Jephcott ( if fit) to tear their defence to shreds

It's our defence we should be worried about.
Post a reply
Previous 1, 2 Next
15 posts Page 1 of 2
Return to Plymouth Argyle Fans Forum