Welsh side Connahs Quay Nomads clarify the comments made by manager and former Argyle defender Andy 'Jock' Morrison about Covid-19 when three players were ill before a match ...
The Leader

The club are keen to stage a test event match as soon as possible .... Plymouth Live. CEO Andrew Parkinson said ...

"I think the agreement for the clubs this weekend was relatively short notice - something like Wednesday it was given the all clear.
"First and foremost, we would want to see how those events went, and the success of those, but from our perspective we would be looking to put on a test event as soon as possible." 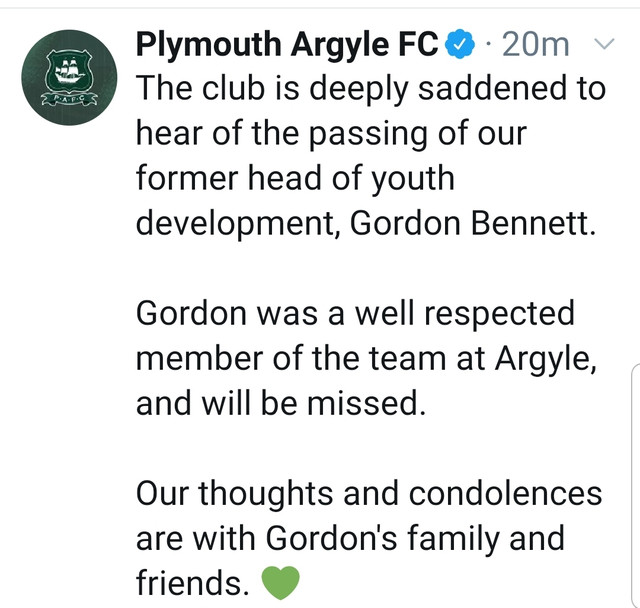 Daily quiz: Name the former Argyle player who played for the Algeria under-20 national team?

Argyle Old Boys: Robbie Turner – the big targetman was already a journeyman footballer before signing for Argyle for £110,000 in the summer of 1990. Robbie started his career at Huddersfield Town and played for Cardiff City, Hartlepool United, Bristol Rovers, Wimbledon and Bristol City before arriving at Home Park.
Robbie gained a reputation as a physical frontman, especially at set-piece and long throw-in situations and he would wear protective covering on his elbows although some would say this was to protect the heads of opposition defenders!
After a very public fallout with new manager Peter Shilton Robbie was sold to Notts County for £90,000 in November 1992. He made a total of 77 appearances for Argyle (all starts) and scored 19 goals.
After Notts County he played for Shrewsbury Town, Exeter City, Cambridge United and Hull City; after retiring from professional football Robbie settled in the south-west and played for Taunton Town and Newton Abbot and started a plumbing and heating business in Newton Abbot. Robbie celebrates his 54th birthday today.

Known to quite a few as ‘Rob the Elbow’
“Golf can best be defined as an endless series of tragedies obscured by the occasional miracle.”

Now there's a blast from the past. What was the connection with Robbie ?

Argyledad wrote: Now there's a blast from the past. What was the connection with Robbie ?

Both played for Algeria Under 20s??
Now THAT is a journeyman!!

I always think of Robbie Tuner on days like these.