The club and KTA Architects Ltd have made a pre-application to Plymouth City Council planning department for reconfiguration of existing car park and associated external works at Home Park. 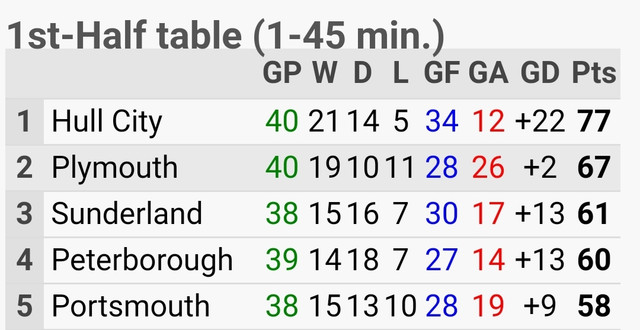 
Interesting that Tony Pulis has such a low win percentage, considering how he moved us out of trouble that year. I assume he must have one of the highest draw percentages, with attritional tactics that left him unloved at most of his clubs.
Remember, I before E except when you run a feisty heist on a weird foreign neighbour in Chudleigh.


According to these stats first half Saturday should be decent


Vampires11 wrote: According to these stats first half Saturday should be decent

I do not suppose EFL i-follow will allow us to pay £5 and just take the first half only?

Vampires11 wrote: According to these stats first half Saturday should be decent

I do not suppose EFL i-follow will allow us to pay £5 and just take the first half only?

And pay the players 50% appearance money only

In my view it’s simple to understand: other managers figure out how to play us and change things around at half-time, and our manager doesn’t know how to respond to the changes the other side has made.
Any other plausible explanations?

The huge difference is due to a number of issues:
The opposition would have scouted and researched us so they know how we play and might implement their plan in the second half, the change in tactics outwits us.
Our mostly young and inexperienced team lack concentration at the start of the second half, we have no leaders to make sure the team keeps it tight.
Similarly we are full of enthusiasm and energy for the first half and generally score goals.
The second half substitutions rarely make an impact, in fact they usually make the team worse.

Last season in League Two we were 4th best in the first half and 3rd best in the second half but we did have the likes of Canavan, Sawyer, Sarcevic and Wootton playing regularly.

Stopping us from falling off a cliff during the second halves is Lowe's biggest challenge for next season.

This season it's been going on for a while, I first noticed it back in mid-November ...

The tables of halves are highly interesting, just hope it’s something that the club’s statistician has picked up on and emphasised to the management.
Although RL clearly knows about the problem as he’s referred to it several times.
What concerns me is that going by his interviews he seems to tell the team “more of the same in the second half”, and he has also said more than once that he doesn’t understand why we perform less well after half-time.
But what if “more of the same” (in other words, the “game-plan”) is what is getting us into trouble, because it is no longer relevant to the circumstances as the opposition have changed tactics after half-time?
That would account for the “game-plan” no longer working, would it not?
In which case, it would be the game-plan and the manager that are principally responsible, not the players. Of course the players will play less well if the opposition has seized all the initiative and has all the momentum, which is what we see time after time in the second half. How can they stick to the game-plan if it is no longer possible to put it into effect because the opposition have counteracted it?!
Putting all the blame on the players is a cop-out, in my view, and this is what RL needs to stop if it is indeed what he is doing, and not just what he says in interviews.
Last edited by philevs on 11:45 07 Apr 2021, edited 2 times in total.


philevs wrote: In my view it’s simple to understand: other managers figure out how to play us and change things around at half-time, and our manager doesn’t know how to respond to the changes the other side has made.
Any other plausible explanations?

I think that's an element but can't be the only thing, you'd expect all teams to have done their homework and have a game plan, as we do. I think part of it may be to do with the pressing he expects from front to back. i remember Klopp taking three full seasons to get the right players in and make the total pressing system work.

Can Ryan expect this to work at league 1 level? Fleetwood did it to us with great effect but overall they are in the same place as us in the table, so can't be consistently doing that either. I wonder if second half we just ease off the press, maybe it's fitness, maybe they are pressing too much, in the wrong areas of the pitch, or not going together, and their decision making isn't there. Camaras a good example of that.

I remember Klopp saying this is really important for each player to know when to press or not. Are they burning out? Just a thought. The stats suggest there is a significant change between halfs, if it were the other way around and we were best in second halfs that would suggest not a fitness issue.

Ryans clearly got a lot to learn about tactical changes. That's another element I feel.


We need 2 old pros in the line up to be vocal at the start of the 2nd half to get into the team, gee them up, be loud ensuring they keep their concentration.

We have no leaders...


I’d be interested to see the data from first to second half in terms of running, sprints etc. You have to wonder if our way of playing takes the legs out of players in the first half and drains them in the second? I might be entirely wrong, but if our performance levels drop then we need to figure out a way of equalising levels across two halves. Totally hypothetical of course. There may be no problem. Lowe often talks about kilometres run over a match but i wonder if there is a difference between halves.

They must be doing lots of analysing the stats, which would be interesting to see in detail. But you can almost sense the 'oh no, not again' attitude of the players when they concede early in the second half(s). I agree with everyone who says that this is when some more level headed experience is needed. I'm sure that many of us will remember when we were players at whatever level, the importance of a trusted, vocal captain who lifted the whole team when things got tough. No offence to Edwards, who has had a good season, but Argyle do seem to lack that.
Post a reply
Previous 1, 2 Next
21 posts Page 1 of 2
Return to Plymouth Argyle Fans Forum