A superb start going 1-0 up in the third minute with a good finish from Jephcott.

We had chances soon after - a Grant goal was disallowed and Jephcott didn't have the pace to get a shot away.

After that Blackpool were the better team, winning a lot of possession and pressing our defence.

Michael Cooper made three good saves and our defending was last ditch rather than measured.

Grant picked up an injury and Camara replaced him.

The second half was more even, Mayor was our main threat, often dribbling into the box and either looking to cross or shoot.

Jephcott was replaced by Telford early in the second half.

Cooper made a flying save as again we were hanging on.

Moore came on at right wing-back with Cooper going off and Edwards switching to the left.

Clear chances were at a premium for both sides.

A win built on a strong defence, it wasn't convincing but you can't argue with starting the season with 3 points against a well fancied Blackpool team.

Mayor, Aimson, Wootton and Camera all had good games but Michael Cooper was easily man of the match.

Good to see two of our own scoring and making the saves to win the game.
Camera made a difference with his surging runs, Mayor was unplayable at times, Macleod was busy and Wootton and Aimson made several clearances and last ditch tackles.

On the downside Nouble was disappointing especially in the first half, he must have received 'some instructions' at half time because he improved for the second half.
George Cooper had a quiet game and with three injuries to players plus Wootton also going down it's clear the players, including Cooper, are not match fit.

Blackpool, like a lot of teams might do this season, pressed our back three and meant we couldn't play our usual passing along the back - moving the play side to side, we had to play long and didn't have the pace or Hardie upfront to make this a success.

Not the usual Ryan Lowe style of attacking football but a win built on a great defensive display and don't forget we had the most clean sheets in League Two last season.

We know how to win games.

It's horrible not being there, while it's good to watch the game iFollow with its problems is a poor substitute.
It must be so difficult for the players to play in an empty stadium but the intensity and commitment was plain to see.

Man of the match - Michael Cooper. 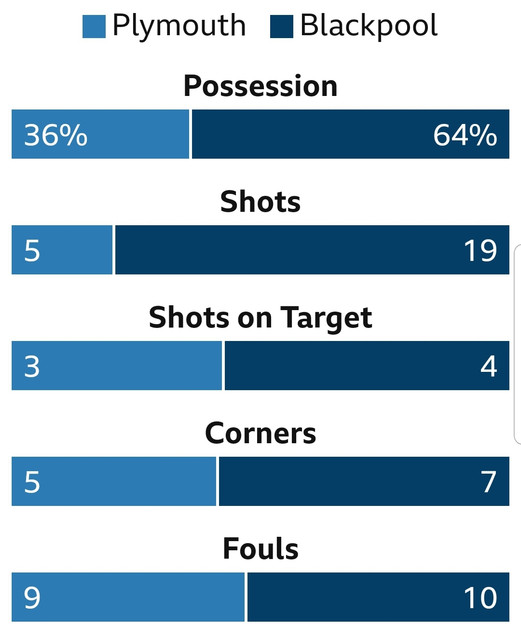 MoTM Cooper
Everyday above ground is a good day


Can't argue with any of that though. COYG


We’re in the play-off position

Remember, 76.4% of all statistics are made up on the spot.


And Bobby's Garden was camouflaged!


Blackpool are a very good team and one of the best we'll come up against this season. That was a big performance and a big win. Aimson & Cooper the standouts but everyone put in a shift.


That was behind the sofa stuff.

Hope hanging on, like that, is not repeated to often.

Cobi Budge wrote: Blackpool are a very good team and one of the best we'll come up against this season. That was a big performance and a big win. Aimson & Cooper the standouts but everyone put in a shift.

There's nothing fortunate about having good players though?

Sure, if Blackpool had rattled the bar a few times or had a goal wrongly disallowed, we could count ourselves as being fortunate, but the reason Blackpool didn't score today was because of the performances on show from our players.

There's nothing fortunate about having good players though?

Sure, if Blackpool had rattled the bar a few times or had a goal wrongly disallowed, we could count ourselves as being fortunate, but the reason Blackpool didn't score today was because of the performances on show from our players.

And quite a bit of wayward shooting but I do see what your saying.
Everyday above ground is a good day


Aimson was magnificent, man of the match by a country mile. Wootton and Watts were also capable against a dangerous attack - I can't see how Canavan gets back into this team.

Yes Cooper made some fantastic saves but he was completely untested in the air. Let's see him play against someone like Northampton before we get too carried away.

Mayor had a good second-half - in fact he looked more dangerous on the ball than he ever did in League Two.

Camara needs to start instead of Grant. He's much more mobile, has far superior ball-winning skills and passes the ball well.

Personally I thought Nouble improved as the game wore on but I still don't see him as a RL player. Let's give him time, though.

That was a very good win against a decent League One side. It reminded me a bit of when we narrowly beat Charlton the last time we got promoted to this league despite them having almost all the ball and chances.

Blackpool did look a little toothless, though, and lacked composure in and around our area. That'd concern me if I was a fan.

Aimson and Cooper heroic at the back!
3 points on opening day very welcome, well played Argyle.


Thanks for the report, sounds a much more even game than the amount of possession suggests. Do we find out how many watched on ifollow?
Post a reply
Previous 1, 2, 3, 4, 5 Next
60 posts Page 1 of 5
Return to Plymouth Argyle Fans Forum